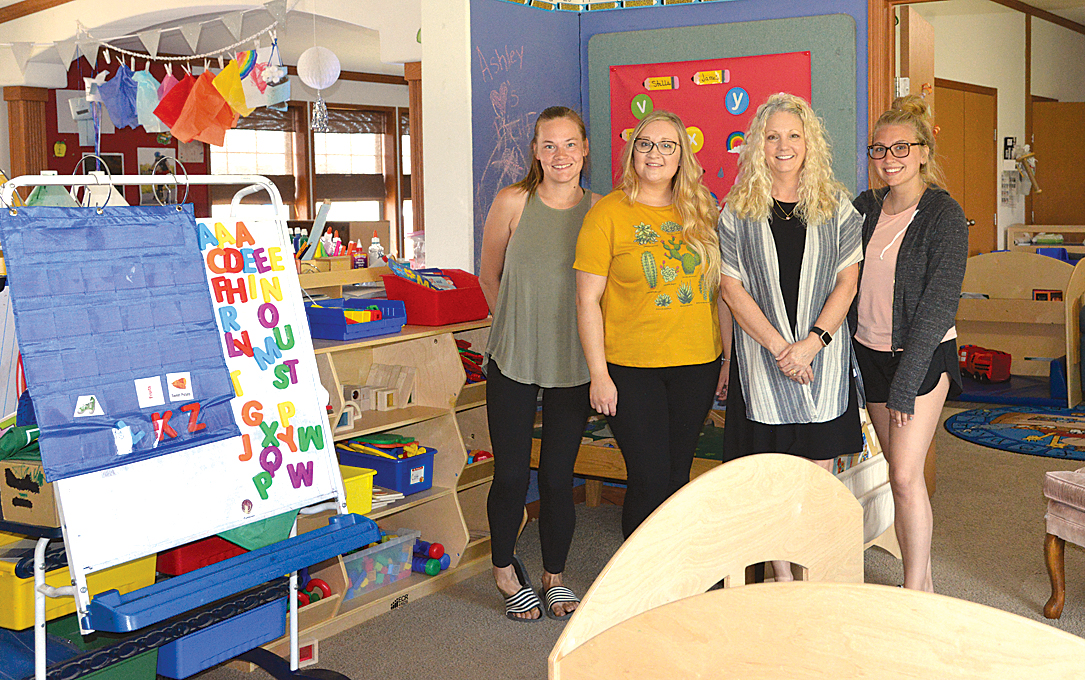 When the Coronavirus hit North Dakota, schools closed, and businesses closed or altered their business model. Daycares were impacted and many in Stanley chose to close. This created a challenge for staff at Mountrail County Medical Center. A cooperative effort between Ragamuffins Ranch Daycare and the Mountrail County Health Foundation worked to fill that need over the last two months.

MCMC Administrator Steph Everett says that the process started on March 23. She began receiving texts from staff expressing their concerns about what they would do as they faced closing schools and daycares. She said that she reached out to Carol Maurer at Ragamuffins Ranch who opened their arms to the staff’s children.

Everett says that each request was met with a “we’ll figure it out” response that was amazing. As they began the conversations, Everett says they had no idea how many staff members would need daycare. Based on the texts from staff, she knew it would be more than just a few.

As they received the guidelines from the state regarding daycares, working together the daycare was ready to start taking students by the weekend of March 27. Working hand in hand, they were ready for the first children on March 30.

Ragamuffins Ranch Daycare owner Carol Maurer says that working on the Bright and Early curriculum and achieving the Step 3 designation made the process easy. The assessments and training she says that by the blessing of God helped them be prepared to take on the challenges.

She says they were already set up to the new standards and guidelines set up by the state for childcare facilities in response to the Coronavirus. That includes the way they use spaces in the daycare, their sanitizing processes and the separations for age groups they already had in place.

Maurer says that the biggest challenge was to bring in children that didn’t know them or their environment. She says they wanted to make sure that each child felt safe and comfortable during this stressful situation. They wanted them to feel at home and happy, knowing this was a safe place to be.

The children coming into the daycare have moms and dads that work on the frontline during this virus fight. Life can be stressful, and children often pick up on that stress.

The staff put their heads together, even knowing it might not be easy, but knew they could do it and come out for the better. Maurer says they really stepped up to the plate and did a great job.

As they got ready to add new children to their groups, Ragamuffins reached out to their parents. For some, they were already planning on keeping their children home with schools and businesses closing or reducing staff. Others offered to keep theirs home to make room, saying that it was important to take care of first responders’ families. She says she gives credit to those families for giving the okay to use their spots.

With some of their kids not coming because of the virus, Maurer said they missed their kids. It was hard emotionally on everyone, but at the end of the day they came back and grew a whole new family with these new children.

As for helping out staff at the medical center, Maurer says that they knew the needed the help and they were ready to do it. It was amazing to watch, she says, and now as the two months come to a close, they will be missing these children that will be going back to their former providers.

Looking back now, Maurer says that everything was a learning curve with stepping stones at the right time with the right help to set up this difference to succeed. She said, “I do it this way and it works. Sometimes you pray and ask God to show you the way. My heart is put into this and we have invested so much of ourselves.”

Everett says that for the two months Ragamuffin met their needs, they were a lifesaver. Eight families with eleven children were helped during this time. Mountrail County Health Foundation, along with grant funds from the NWND Community Foundation helped cover some of the costs.

While many families will be returning to their previous providers this week as daycares resume operations, a few will be staying at Ragamuffins Ranch enjoying the new relationships they have formed.

Steph Everett says that they just knew at the beginning they had to do something to help their staff. All of this was so new to medical facilities. They had heard about the first stories with coronavirus coming from a nursing home in Washington. The focus became on what if it happened here.

“For medical staff, there is no choice but to be at work. The last thing we wanted was for staff to have to make a hard choice. We needed them here, for Health Centers never shut down. Some of our Staff made shifts from their clinic positions to helping at the nursing home, for they were needed there to ensure our nursing home residents were cared for,” said Everett.  “The partnership with Raggamuffin Ranch allowed us to take one huge stressor off our staff. Especially through this, maneuvering through unchartered territories over the last few month,” Everett said.

The two month partnership between the medical center and Ragamuffin Ranch is just another example of small towns pulling together to help each other through these challenging times. It is also an example of meeting critical needs through collaborative effort.

This article is republished by the gracious consent of the Mountrail County Promoter.